Divine revelation and inspiration have been among the most positive and highly-valued experiences across the ages. Voice-hearing is known to be a part of such occurrences. Spiritual visions have been interpreted differently across historical periods and cultures, but voice-hearing with spiritual meaning has been, and continues to be, an important part of many people’s lives.

Listen to the podcasts below to find out more about the links between voice-hearing and spirituality and then scroll down to see some of the key displays in this section of the exhibition.

The feature on ‘Visionary Voices’ contains interviews with Hearing the Voice researchers Corinne Saunders, Chris Cook and Hilary Powell and was produced by Andrea Rangecroft for Hearing Voices: suffering, inspiration and the everyday.

In the Middle Ages, the existence of heaven, hell, and a spirit world were taken for granted; anyone might encounter God, the Devil, or any manner of spirit in between. Some actively pursued a direct connection with the divine, seeking visions – often involving more than one of the senses – as a means of increasing religious knowledge. Images of Christ’s crucifixion were a focus of intense contemplation. Mystics denied themselves food, kneeling for hours, concentrating their whole selves on the suffering of Christ and seeking revelation. They hoped to emulate their saintly forebears, gaining prophetic knowledge or greater understanding through dreams and visions sent from God.

The power of such visions of heaven and hell is captured in many texts from this period. The model used by Dante of Inferno, Purgatorio, and Paradiso has perhaps been the most influential. There were, however, many others who made vivid records of their active participation in and imagining of these demonic and divine visions. 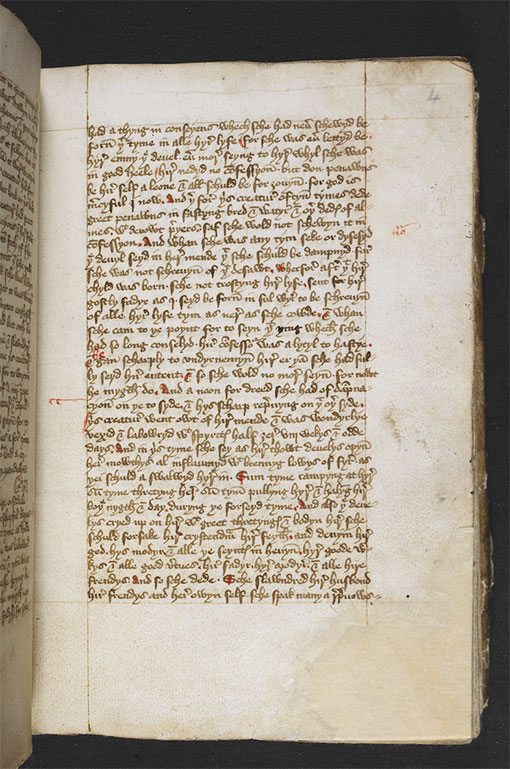 The Book of Margery Kempe records her mystical experiences. This page describes devils “pulling her and hauling her about both day and night”. 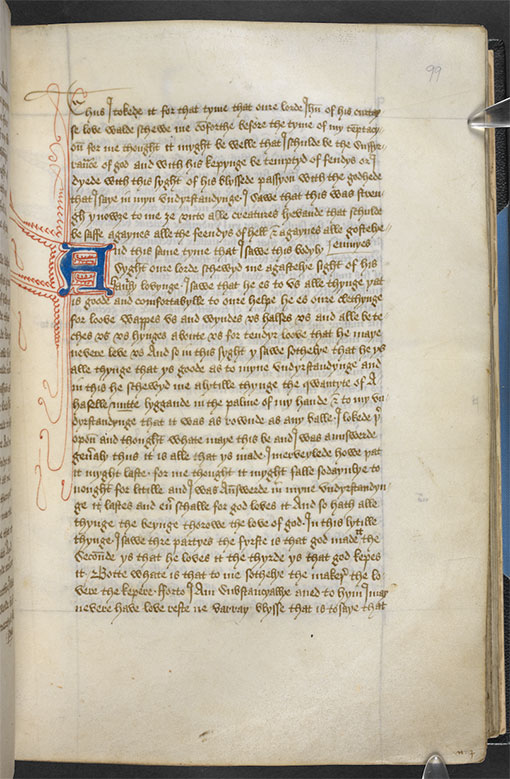 Julian was one of the most influential medieval mystics. Her Revelations were recorded in manuscripts during her lifetime: a short text written soon after she experienced the visions and a longer text written 20 years later. This is the only surviving original of the short version.

Revelations of Divine Love describes 16 visions of Christ, the devil, heaven, and hell that came to Julian while she was extremely ill in 1373. These visions inspired an original interpretation of God’s nature and his relationship with humanity. Here, God shows Julian a hazelnut. The nut is revealed to Julian as an image of creation – “all that is made” – which, although small and fragile, will survive “because God loves it”.

In the latter years of her life as an anchorite in Norwich, Julian met Margery Kempe in 1415. Margery Kempe (c. 1373– after 1438) is credited with dictating the first autobiography in English (The Book of Margery Kempe), which describes her experiences of hearing voices and seeing visions that were spiritual in nature, and how, in turn, people had reacted to her. One of these voices had counseled Margery to solicit Julian’s authoritative help in interpreting and validating these voices and visions. 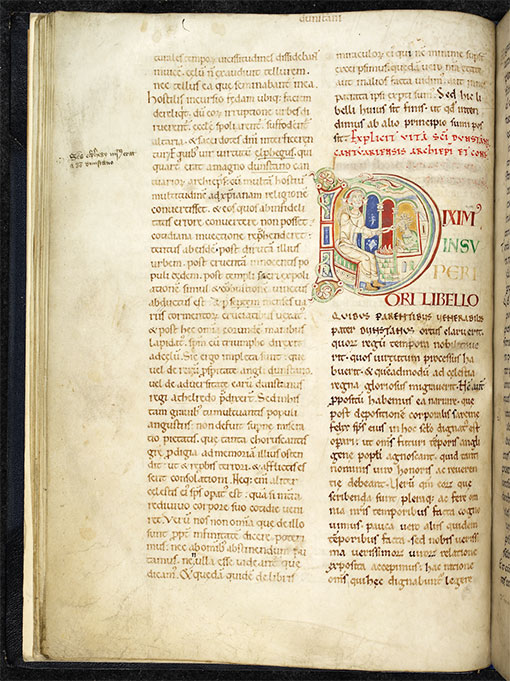 Eadmer and Osbern, ‘Life of Dunstan’ in the Canterbury Passionale
Early 12th century

‘Passionales’ were collections of stories about saints and martyrs, read during early morning prayers. This example from Canterbury has illuminated letters at the beginning of each story and is shown open at the life of the 10th century saint Dunstan. This version of the saint’s life emphasises his experience of dreams and visions. The illumination illustrates a story of one such vision: Dunstan uses blacksmith’s tongs to tweak the nose of the Devil who has taken the form of a woman in order to tempt him.

© The British Library Board, Harley MS 315

The following articles by Hearing the Voice researchers are available to read freely and provide more information about voice-hearing and spiritual experience from past and present day perspectives: